Snakes Alive! (If you're scared of snakes, don't look!)

Maybe it's because we're daughters of a veterinarian, 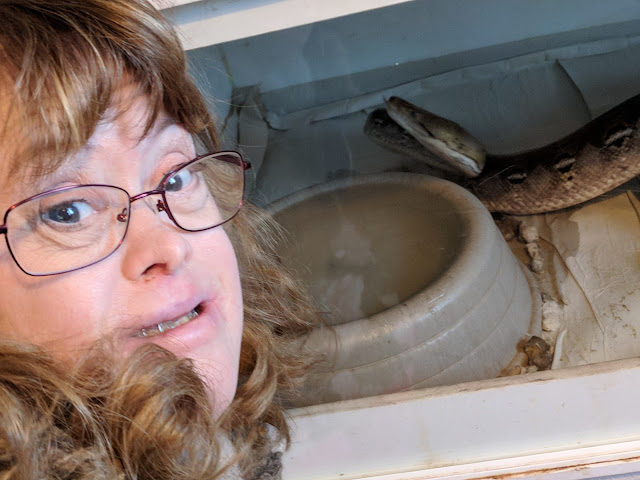 but when Carolyn and I had a chance to hold some snakes, we did! 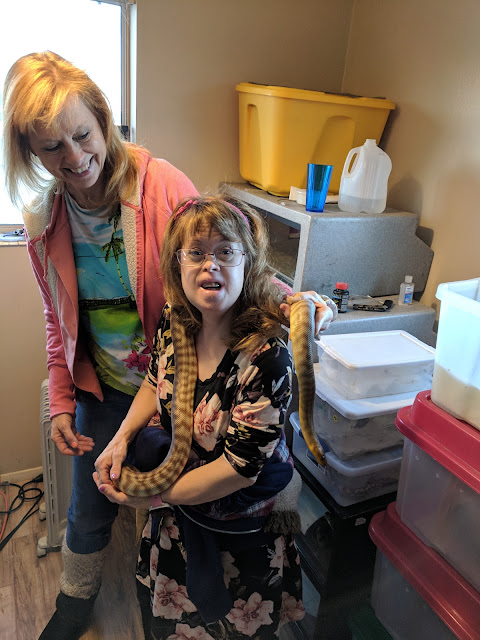 They were pythons, which I'd hate to meet in the wild, but it was actually fun to hold them with the professional snake handler/owner standing two feet away. He told us to let the snake slide through our hands and keep picking up the body behind the head, rather than trying to hold onto it and make it stay still. 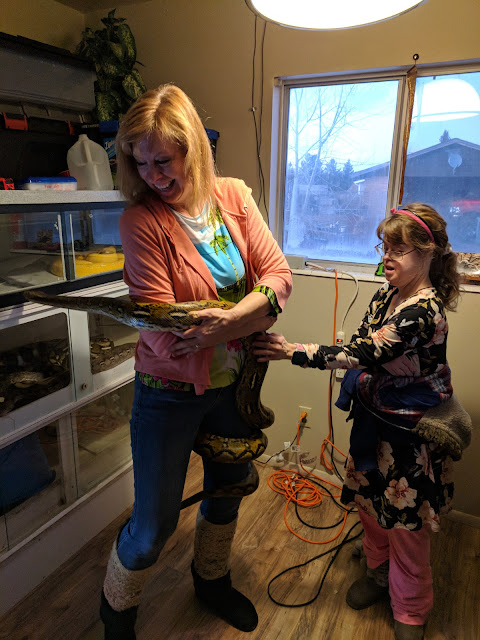 I talked to a neighbor once who told me a horror story of finding a critter in her house. I thought she was going to say she found a mouse, but she said "snake," then looked at me with a horrified expression.
I didn't return the look. I think snakes feel awesome when they shimmy through my hands. 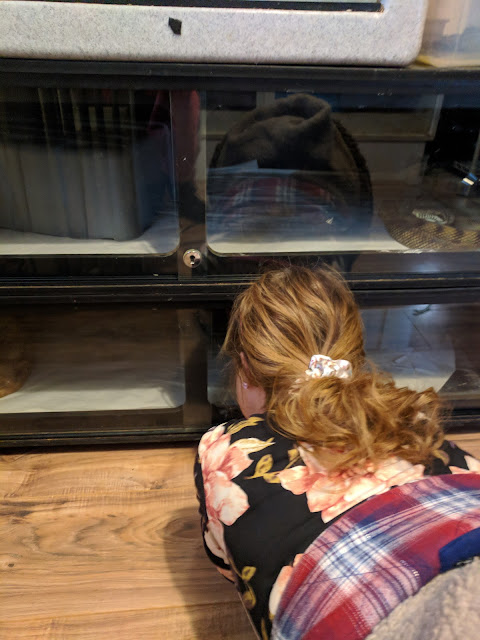 Carolyn didn't seem to mind getting up close and personal with the snakes, either.
We like having adventures!
Do you take offense to any particular animal?
If so, which one?
- January 28, 2019 No comments:

Why, yes, I found a parking space, thank you. My car is the candy blue Ford Focus pictured below. I had a lovely time parking, as parallel parking was my best subject in Driver's Ed. (Seriously! I'm GOOD at it!) My worst Driver's Ed. skill, you ask? Backing up. (I'm made to go FORWARD, baby!) 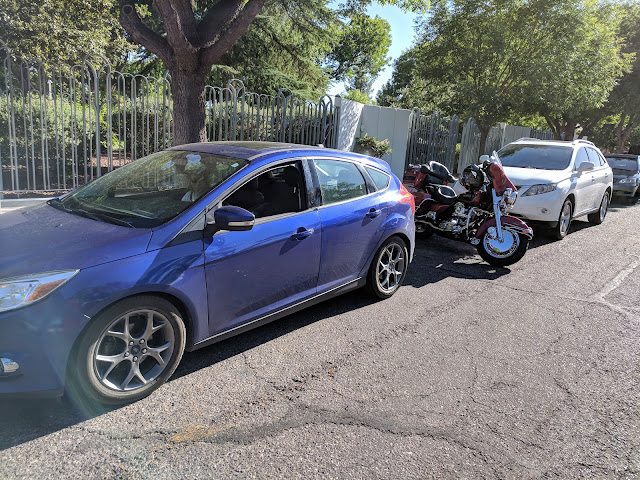 When I came back to my car two hours later, I saw an advantage to driving a motorcycle. Not even a Smart Car could fit in that space! 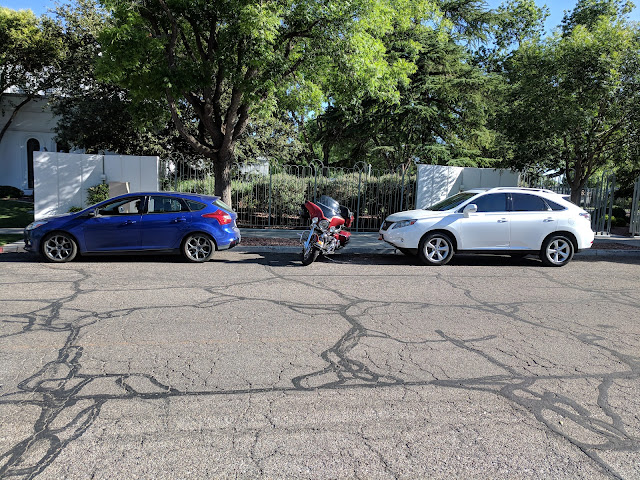 Are you a motorcycle fan?
(And did you notice that the three vehicles pictured are red, white, and blue?)
- January 21, 2019 No comments:

Email ThisBlogThis!Share to TwitterShare to FacebookShare to Pinterest
Labels: motorcycles

Eating in the Car

My husband doesn't like to eat in the car. He's concerned about being distracted for even a second while traveling at high rates of speed.
I must concede that he has a valid point. All I can do is wonder how he ever gets everything DONE?
(Oh...organization? What's that?)
;o) 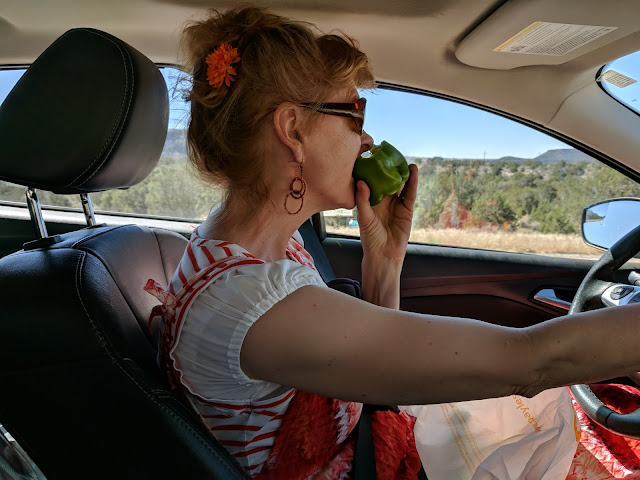 One time while riding with my sister, I pulled out a bell pepper and took a bite like it was an apple.  Startled, she asked, "You don't cut those up?"
"No," I replied, "takes too much time. It's easier just to bite into it."
"Wow," she said. "I always bought those little peppers in the bag to eat in the car, because I didn't have time to cut up a big one."
"Well," I said, "now you don't have to." I held the pepper out to her. "You wanna bite?"
She tried it...she liked it!
When my littlest sis Carolyn saw me biting a pepper in the car, she thought it was so funny that she took a picture.
Do you eat in the car?
What do you eat?
- January 14, 2019 No comments:

Email ThisBlogThis!Share to TwitterShare to FacebookShare to Pinterest
Labels: eat, eating in car, eating in the car, green pepper, pepper

Once upon a time, I tried to remove a brown ring from around the toilet in our house. It was there when we moved in, and wasn't getting any better. I tried several cleaning products that promised to whiten any throne, but nothing I tried worked. I even tried the Coca Cola cure.
It didn't work, either.
Then I studied a Youtube video that suggested draining the water from the toilet, stuffing a rag in the hole, then sealing it with a simple circle plug. (Linked video is not the exact one, but has the same concept. I grew tired of searching.) THEN pour in hot water to the holes on top, add the cleaner, and let sit for an hour. 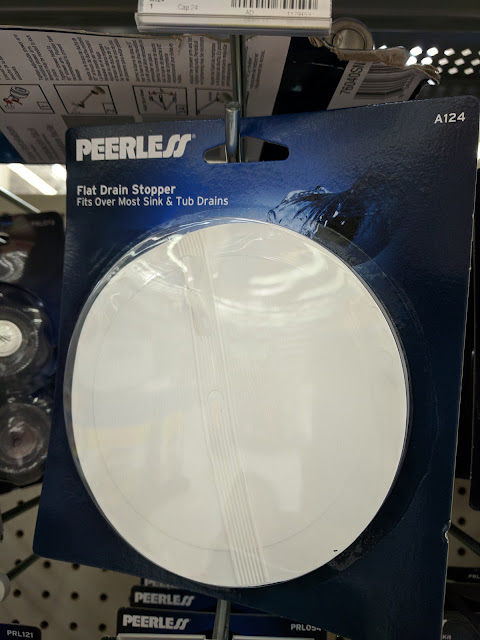 I was willing to try it! I just didn't see any need for the rag in the hole once I got the water out. I mean, the circle plug fit just fine. So I didn't bother with the rag.
I got this.
I poured in the magic solution, then left the bathroom to do some work in the kitchen. (Housework is never done, in case you didn't know. At least, it's never done at my house.)
After about five minutes, I heard a mysterious whooshing noise coming from the bathroom. It sounded like the toilet flushing...but it hadn't been an hour yet! Who was messing up my cleaning plan? 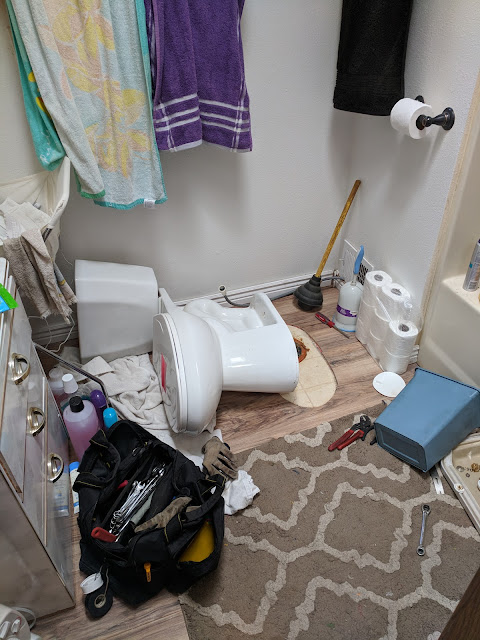 It turns out I'd sabotaged myself. The water pressure pushed the wimpy rubber plug down the drain.
Was it almost to the septic tank, clogging the drain f-o-r-e-v-e-r?
After Mighty Bob pulled the toilet, he found the plug sitting crosswise on the very edge of the abyss.
(Whew!)
And he still likes me.
Brown ring and all.
In fact, he prefers a stubborn brown ring staying in the toilet to pulling a toilet off the floor.
Odd.
I actually finally got rid of the ring with a pumice stone cleaner thingy. (This is not the exact brand. Either it's not made anymore, or I'm Internet-Search-Challenged.)
I maintain the bowl with bleach tabs added to the toilet tank.
Have you had an cleaning mishaps at your house? What happened?
- January 07, 2019 No comments:

As a Special Olympic Cheerleader, Carolyn rode in the Washington County parade with style. If you know Carolyn, you know that she loves anyt... 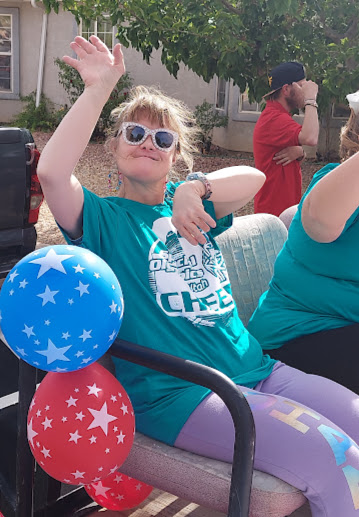