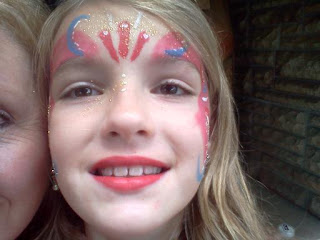 She came from Las Vegas... maybe that's the reason, but I don't think so. I think it's because she's related to me.
When my granddaughter came to town to be baptized, she chose some prelude and intermediate hymns to sing at the July event. Among "As I Have Loved You" and "Families Can Be Together Forever," she chose "Away in a Manger" and "Angels We Have Heard on High."
And why not? Who says it has to be December to sing Christmas songs? Well, actually, I have heard people who compartmentalize holidays because it just makes sense to them and brings them comfort and order, but Anneke is a free-spirited thinker, kind of like her Grammy!
Which one are you? Do you feel more comfortable operating inside the box, or do you sometimes like to draw outside the lines? 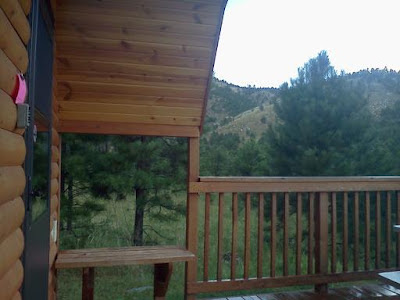 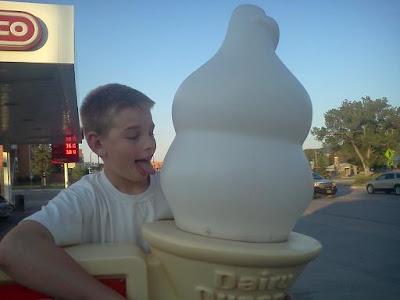 Our South Dakota trip offered fun and surprises! We had a terrific cabin, as private as it could be considering it was in a campground, and BONUS! It was right across the road from the showers and flush potties (my favorite!) Our son enjoyed his birthday en route (driving across Wyoming for your birthday... woohoo!) He was a good sport about it, and is now an OFFICIAL TEENAGER! As such, there were several places we went where we had to pay full price for him, whereas if we'd gone a week earlier, he would have gotten in at the kid rate. One unforeseen setback is that we were supposed to meet my school friend, Kathleen, and see some sites with her and her husband, Marty. Instead, Kathleen had to head to Utah for an unexpected funeral at the same time we were driving to South Dakota. We stopped at a gas station along the way for a hug. I forgot to get a picture with Kathleen, but I caught up to her daughter Tonah and got a picture with her. (I look like I'm talking. I HEARD THAT! Who's the wise guy who said "When is she not?") 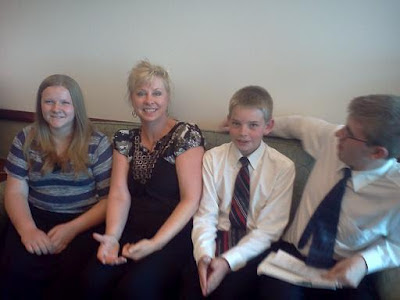 Bron cracked me up with his statement about the "Great Walls of Wyoming" because there were drift fences EVERYWHERE! 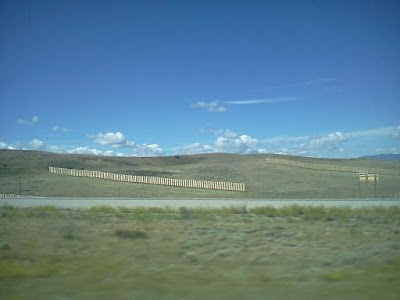 On the way home, I drove over a hill in Nebraska and suddenly realized we were in a game of "Chicken" with a tour bus. (The bus won... I pulled off the shoulder and slowed enough to give the big bus time to swing back into its own lane.) When we reached Wyoming, I had to go, mon. Luckily, we spied some porta potties at a construction site off an exit that read "No services." I don't like porta potties, but this was an emergency, so I pulled off. Strangely enough, a man sat in a truck with Nevada plates directly in front of the potty. He looked like another desperate tourist waiting for someone in his family to finish at this oasis of potty-ness. But when we approached, he called out his window, "These aren't public toilets. You don't want to go in there." 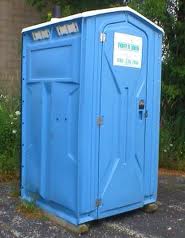 (Did he want me to go out here?)
As soon as we got back in the truck and backed up, he pulled away from the porta potty. What?! He'd been sitting there the whole time we'd pulled off the exit and driven up to the facility! Was he really just sitting there waiting to turn us away? That was my first encounter with the Porta Potty Police. 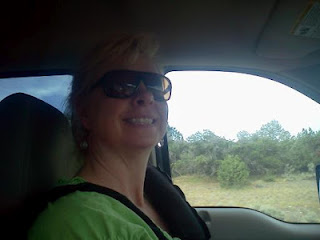 I'm proud to say I made it the half hour it took to reach the next rest area. (If there'd been Rest Area Police, I would have run them over.) Once home, we unloaded the truck. (It's amazing how little I can make do with on vacation. One suitcase and I'm good! Of course it's so full it doesn't zip up, and besides that I only need my purse... my computer bag... and my rainbow bag that holds everything from bandaids to a can of root beer.) Of course we had to take a day to recuperate from our relaxing vacation.
So, tell me, what is your best vacation, real or imagined? 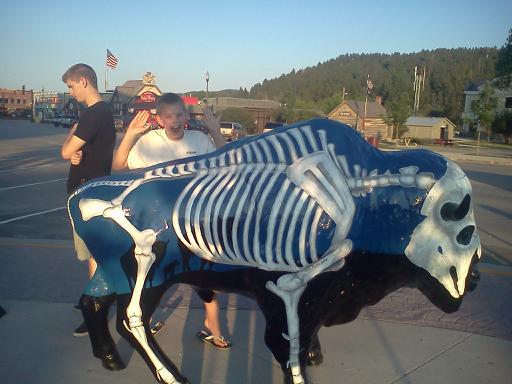 Happy Birthday to my littlest sister! 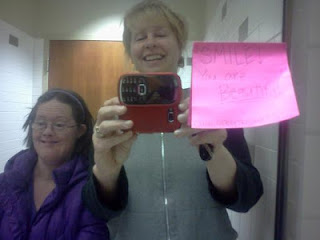 She's 46...she's fabulous... she's my little sis! When you're fun-loving sisters, size doesn't matter... she's 5 feet tall, I'm 6 feet tall, but it makes no difference in spending time together. When we found a sticky note on a public bathroom mirror (side note: guys, here's your chance to see the inside of the ladies' restroom, in case you were curious! Betcha don't find notes like these the mens' potties!) it said, "Smile! You are beautiful."
So we smiled, because we are.
What makes you smile? 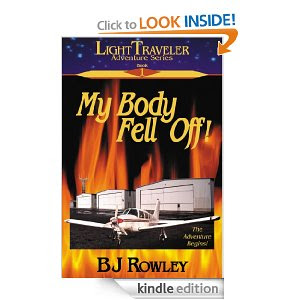 I can personally vouch for the talent of author BJ Rowley, having read most of his masterfully written books. NOW YOU CAN DISCOVER THIS ENTERTAINING AUTHOR FOR YOURSELF! For 5 days only, STARTING TODAY, FRIDAY THE 13th, the first ever "Light Traveler Series" book is yours on Kindle at no cost! (HOW does he DO it?)
Just go here to get yours: MY BODY FELL OFF!
THIS IS NO NAMBY-PAMBY, hold-your handy book. It was actually pulled from shelves after a reader complaint, so it's also one of those famous banned books that you can now SEE WHAT THE FUSS IS ABOUT! Download yours now, before it's gone! MY BODY FELL OFF!
A Breathtaking Out-of-Body Adventure That Will Have You Sitting on the Edge of Your Chair!          Imagine going to bed one night and suddenly finding yourself floating around on the ceiling—looking down at your own sleeping body!          Imagine being able to leave your body anytime you want, and passing invisible through walls and doors—and even people!          Imagine transporting yourself to your friends houses in the blink of an eye without them even knowing! Or floating right into movies and concerts for free! Or enjoying the Super Bowl on the fifty yard line—right behind the quarterback!!          Then, imagine finding yourself inadvertently and invisibly witnessing a top secret meeting of some of the most dangerous criminals of our time as they hatch a multi-million dollar conspiracy involving blackmail, kidnapping, and murder!         Last chance... download it now, read it later...you know you want to, so click here! MY BODY FELL OFF!
Have a good day, a happy day, a free reading day!
- July 13, 2012 4 comments: 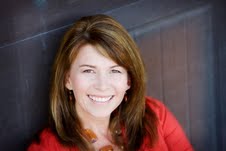 Connie Sokol is a mother of seven—a national and local presenter, and a regular speaker at Education Week. She is a monthly TV contributor on KSL’s “Studio 5” and regular blogger for LDSLiving online. She is a former TV and radio host for Bonneville Communications, and columnist for Deseret News and Utah Valley Magazine. Mrs. Sokol is also the author of Motherhood Matters, Faithful, Fit & Fabulous, and Life is Too Short for One Hair Color, as well as talk CDs and podcasts. Mrs. Sokol marinates in time spent with her family and eating decadent treats.

"Caribbean Crossroads" review:
I’ll admit it… I don’t usually read romance novels because they’re so predictable, but Connie Sokol offers up some fresh, exotic courses in her book, “Caribbean Crossroads.”
Emotionally smacked down by a cruel dating game, Megan lets her best friend talk her into taking refuge in a summer job as a back up Broadway show dancer on a Caribbean Cruise ship. Predictably, she meets a tall, handsome man (named Bryant) who can dance and sing and has nice muscles even through a T-shirt. But after her previous heart-shattering experience, she doesn’t want any of Bry. At least she doesn’t think she does, especially when she meets the rival love interest who is proportioned like a Barbie doll, but wait…she’s not catty and rude. She’s a nice person. Truly. (I enjoyed that stereotype snap!)
I will admit I rolled my eyes when “Barbie” arranged to fall into Bryant’s arms just as Megan came on the scene, but to her credit, Megan recognized the charade for what it was. How refreshing. Thank you, Connie Sokol.
Once Megan admits that Bryant is sincere and worth her time, she must deal with some internal struggles (which I won’t give away) that had me thinking she was just dragging things out - until she resolved them. Then it all made sense!
The exotic setting is fun, and the down-to-earth ending offered a true emotional release. So if you want to enjoy a vicarious cruise with some romance thrown in, (think “Love Boat,” which is actually mentioned in the story!) then “Caribbean Crossroads” is a good read, summer or winter or any time in between.
CLICK ME TO VISIT CONNIE'S WEBSITE!
AND THEN CLICK ME FOR HER FACEBOOK PAGE!
- July 09, 2012 No comments: 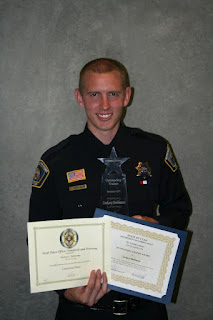 My son finished his corrections academy training and took his oath last Friday at a graduation ceremony. Awards were given for things such as shooting, physical fitness, and academic achievements. At the end they announced the outstanding trainee award for... Zackary Bahlmann! I used up a whole half pack of tissues crying for joy for my son. (Above: Zackary, Grandpa Bahlmann (fresh out of the care center with his healing leg) and Jeff Bahlmann (police officer for St. George, Utah, and the one who presented his brother Zack with his certificate of graduation.) (Below: Shirley (with all her makeup cried off) Zack and Bob.)
The thing that impressed me most about this whole adventure is when Zack came home from his first day of work and I asked him how it was. "Wonderful," he answered without a pause.
Everyone can do something, and it doesn't have to be the same thing as the person next to you. My hope is that we all can find the thing that makes us feel wonderful every day.
When I recently told some ladies that I ache to write as much as my body yearns for food, one of them said, "I need to get a new hobby."
What is your passion? 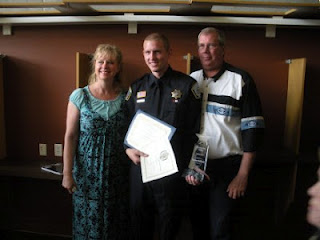 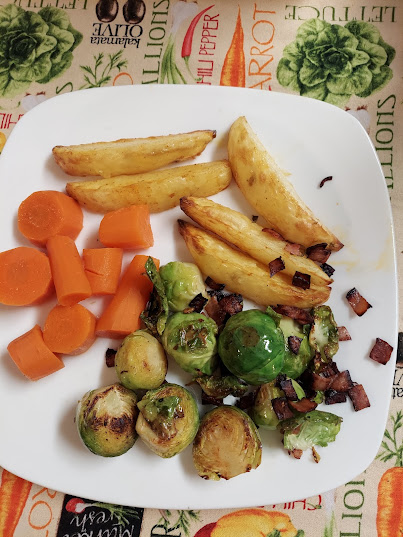