When I saw this cloud, I knew immediately what it looked like, but my teenager, Michael, said it wasn't what I said it was.
WHAT DOES IT LOOK LIKE TO YOU? 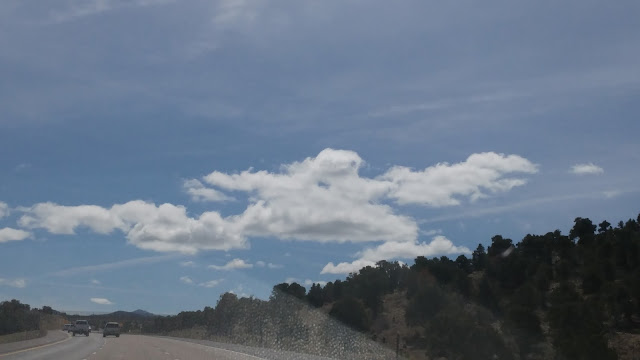 I see a frog running across the sky, taking long strides.
Is that what you got?
Do you like finding shapes in clouds?
When my boys were younger, we used to make a bowl of popcorn, then pick up one kernel at a time and say what it looked like before eating it. (Why should the clouds have all the fun?)

Shirley on a Rolly Thing

When I saw my niece (check out her handstand on the right side of the photo! We're both amazing) zipping around on this little white two-feeter unit, I asked for a turn.
Wow. Watch out! Windmill arms coming through!
My niece didn't have that windmilling feature on her speedy quick ride through the house. She just zippity-do-dahed right along, arms wherever she wanted them to go, not focusing on keeping her balance.
She was just... balanced! 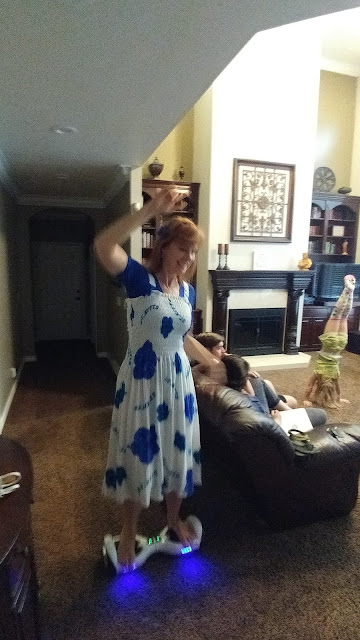 Well, adventurous Anderson girls abound, so of course my little sister had to take a turn. She got to where she could steer herself pretty well, and she didn't even run over my toes! 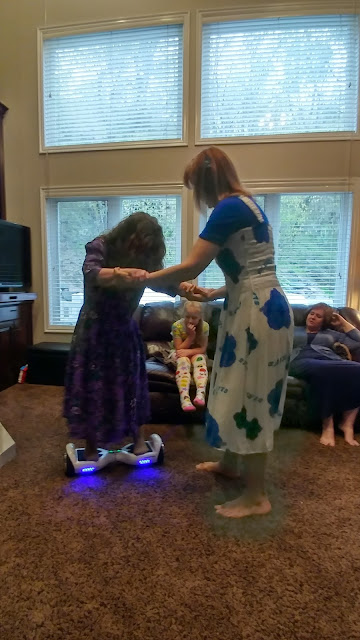 My son Scott got the hang of it so quickly that he rolled down the hallway with perfect balance in a kind of creepy-blue-lights-robot/alien-coming-to-get-you (Look, Ma, no hands!) 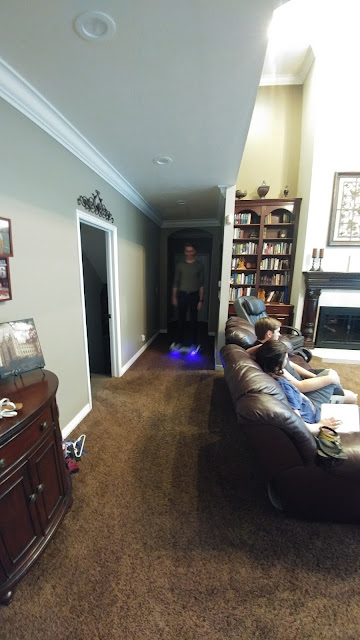 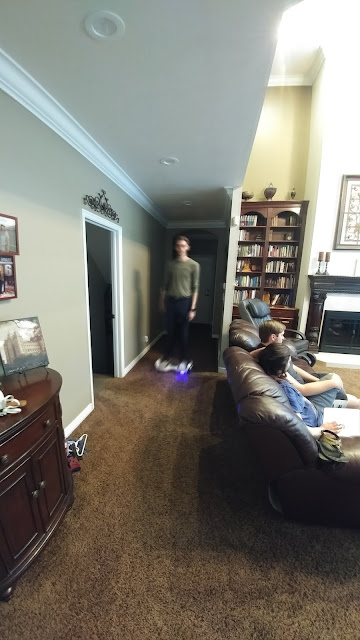 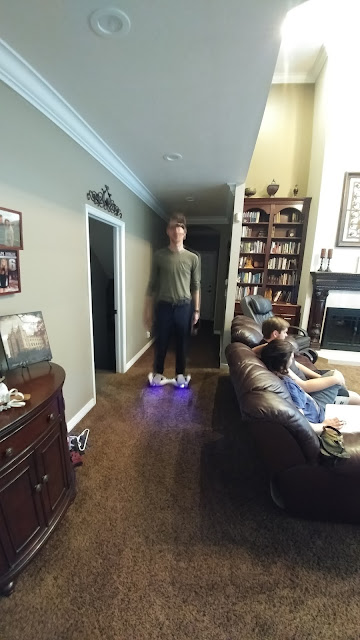 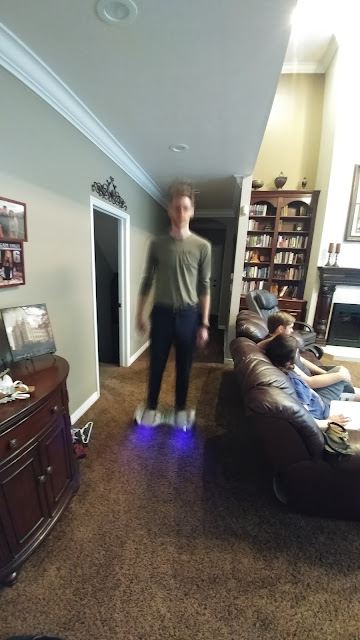 If you had to the chance to ride this space age- looking thing (which I was told is called a "hoverboard" EVEN THOUGH IT ROLLS, PEOPLE!) would you ride it?
Why?

As a passenger in my car while my son drove, I took the opportunity to take a picture of an interesting patch of trees on an otherwise bare hillside. I wondered, "Why is there a thick patch of trees there? Did a fire burn all around it and skip over that part? That would have been cool to see. Is the rest of the hill diseased? What kind of disease? Is that the only place where there's enough ground water to grow trees? Or is that where an alien spacecraft landed and unloaded their potties, making the soil particularly rich?" 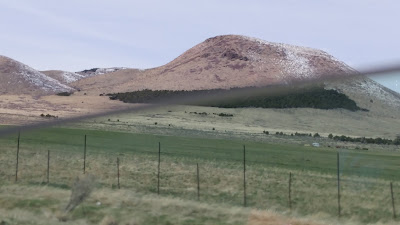 As I took the fascinating picture, the car window rolled up into view. (See the window line in the photo above, cutting through the grove?)
Since that startling event strengthened the alien theory, which could result in my car being controlled by forces outside myself, I looked around for a reason.
That's when I saw that my teenage son had a smirk on his face and his finger on the buttons that control all the windows.
Ah-ha! 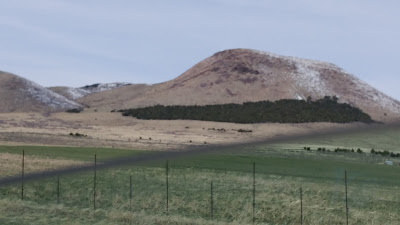 Well, I'm a speedy camera girl, so I took another picture, but I STILL got a window in the frame from the guy trying to police my photo opportunity. (The window is a little lower, underlining the trees as if separating them from the green field, but it's still there!) 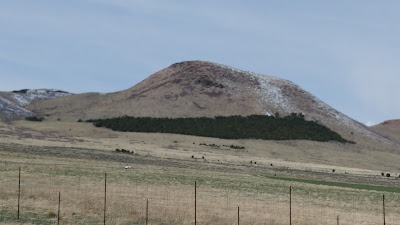 So as the window spazzed up and down with my teen's twitchy fingers, I clicked and clicked until I GOT ONE! Above is a nice, clear picture of the strange grove along the west side of I-15, north of Beaver, (yes, there really is a town by that name) Utah.
I think my teenager is pretty funny in his own, strange teenage way. He's kind of quirky, like this unusual patch of trees.
So, do you "get" teenage humor? Or would you rather wait until a teenager is no longer a teenager before you talk to one?

My Family When I Was Seven Years Old

While going through some boxes of my old papers, I found this picture I drew of my family when I was seven years old. 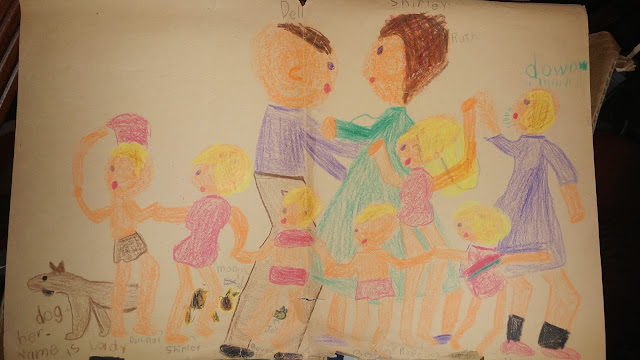 How do I know I was seven? Because Carolyn isn't in the picture, and she came along when I was 8 years old.
My just older brother, DellRay, is on the far left holding a bucket on his head with an impossibly long arm. (He needed the arm to hold the bucket, don't you see? He was really good with his chemistry set, so maybe he turned himself into elastic man for a day.)
His other (impossibly short) arm is extended to hold my hand. (Maybe he had the secret ability to pull his arms through his body, like a pipe cleaner through a hole.)
Awww, look at that. We're ALL holding hands! My awfully curvy seven-year-old self is holding onto bikini Bev, who was five going on six. (She still loves to tan.) Then there's four-year-old Greg, who usually matched DellRay when we were kids, but he's got a red suit that summer for some reason. Loraine, the only one with stylish stripes, was turning three that summer.
Behind us is 11-year-old Rebecca, also in a red suit, holding onto 15-year-old Melinda's hand.
Now I've got to wonder why I drew Melinda in a dress and socks and shoes instead of a swimming suit? I don't know. Maybe she swam in a dress. Maybe it's because her legs were broken. (I mean, LOOK at them! She should be walking with  crutches at least!)
It also appears that she's saying, "Down!" (Written in blue above her head, with little blue talk lines radiating from her mouth.)
What does that mean?
I forgot to write an explanation.
Then it looks like my parents are dancing in the middle of us all. (My father loved to dance.)
So now you'll be able to recognize all of us on the street.
You're welcome.
What's your favorite summer activity?