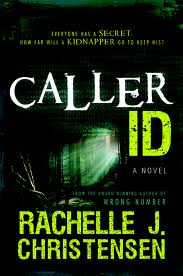 Man, doesn’t it feel good to go galloping toward the woods? I love the wind cooling the sweat off my brow. Ah, the shade feels great. Hey, look, what is that? Check out all those green plants growing in that field. How pretty! Uh, oh. It looks like marijuana. How illegal!
Yikes. This place reminds me of Rachelle J. Christensen’s new suspense novel, Caller ID, where a girl from a privileged family is warned not to go into the woods, but does she listen? Of course not. (She doesn’t wear a red cape, either, and she encounters worse than a wolf among the trees.)
Here, let’s sit by this stream. Watch out for that pipe, there. Don’t trip on it. It’s a clever system for watering those plants, designed by desperate men who will do anything to keep their activities secret.
Hush! Do you hear that? Someone’s coming! What if it’s Ramiro? Trust me, you don’t want to meet Ramiro. Hide, hide! No, move over, part of me is still sticking out! Where’s a bigger tree? Ahhh, it’s too late!
Oh, it’s only Rachelle. Whew. Girl, you gave me a heart attack! You didn’t see Ramiro, did you?
RACHELLE: No, but I did see a squirrel with some pretty big buck teeth.
SHIRLEY: Well, you’ve got to watch your back when those are around. (Looks up.) Now I’m afraid that a squirrel might jump on my head and chew my hair off. Warn me if he shows up overhead. That reminds me, I’ve got to ask you a question. Embarrassingly enough, when I tried writing my first “suspense” novel, my sister laughed at the scary bad guy because all he did was yell threats at people. (Gotta rewrite that scene.) Your suspense is bruisingly believable. How do you write your suspense so that it grips the reader, yet doesn’t cross the line?
RACHELLE: I try to look at things from a different angle. I take a motivation and twist it. I ask, “What if someone did the unexpected?”
SHIRLEY: You tied such diverse threads into your story, such as relationships between parents and children, romantic interests, pets, subterfuge, and deadly confrontations. What’s your method for weaving so many varied elements together?
RACHELLE: Masters in underwater basket weaving. No, I think it’s because those are the types of books I like to read, and I want it to seem as realistic as possible so the reader gets lost in the book.
SHIRLEY: It looks like you got lost in the woods because you’ve got a leaf in your hair. No, you missed it. There. Okay, now it’s gone. How did you learn about growing marijuana? (Inquiring minds want to know!)
RACHELLE: I grew up in rural Idaho where they face some of the same problems as here in Utah—tons of illegal drugs growing on farmlands, in the desert, mountains, etc. There are tons of articles in the news on this and I interviewed FBI agents and police officers too.
SHIRLEY: What a great idea! Ask the experts! I read a lot, so I was pleasantly surprised by the twisty-turns at the end of Caller ID. It was like deer trails disappearing into a grove and coming out at a totally unexpected point. I did not see them coming! Do you run your ideas past other people, or do you boil them up in your own brain?
RACHELLE: I love brainstorming with my husband and my brother and his wife! They also helped me with the plot in Wrong Number. It’s awesome the way the plot solidifies when you have the opportunity to bounce several different angles off people to see if it holds solid.
SHIRLEY: Do you hear that? Sounds like a 4-wheeler coming. Were you expecting anyone?
RACHELLE: No. Were you? J
SHIRLEY: No. I wasn’t even expecting you. Maybe the good guys are coming to shut this operation down.
RACHELLE: Or maybe the bad guys are coming to harvest their crop.
SHIRLEY: We’d better get out of here. Hey. Where’s my horse? Great. It’s gone. Now what?
RACHELLE: (Pulls out key.) I’ve got a motorcycle parked on the other side of that stand of trees. Come on. We’ll ride home along the knife ridge between those two unbelievably steep canyons.
SHIRLEY: Like I said, Rachelle’s the master of suspense!
Now click here to visit her WEBSITE!
And click to visit her FACEBOOK!
You can even have a clicky party to see her BOOK TRAILER, POSTER, PUBLISHER BLOG, PUBLISHER FACEBOOK, and TWITTER!
- March 29, 2012 No comments: 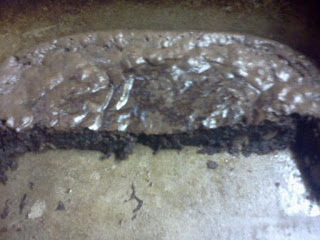 I came home the other day to half a pan of BROWNIES sitting on the stove. Since my metabolism went traitor on me, I don't bake BROWNIES any more, but one of my sons did. Ooo, they smelled so good. Ooo, they tasted even better!
Then I found the frosting. Soft, sweet, meltingly delicious, I spread a bit of fluffy goodness on one of the warm brown rectangles. It looked very springy until my son walked in the kitchen and stopped in his tracks. "Mom, what did you do?" he asked, his eyes wide. "Is that guacamole?" 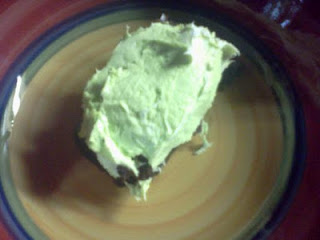 I admit I have a reputation for veering toward health consciousness, although not on a vigilante scale, but even that seemed a bit extreme. Yet I have made black bean brownies before, so guacamole brownies? Hm.
Do you thing one should consider all aspects of a plot twist before discarding any, no matter how unlikely they sound? Do you think you could get something unique out of an unlikely mix?
CLICK HERE FOR ONE MORE IMPORTANT WRITERLY MESSAGE: KINDLES FOR KIDS
- March 26, 2012 1 comment: 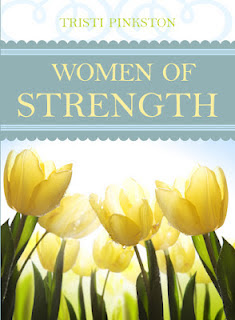 Author Tristi Pinkston announces the publication of her tenth book, Women of Strength, a nonfiction inspirational publication geared for the LDS market that is perfect for Mother’s Day gift-giving … or as a very thoughtful present for yourself on any occasion. She’s holding an online book launch on her blog all day on Saturday, March 24th, and you are invited! Every two hours from 10 a.m. to midnight, Tristi will be holding mini-contests, answering trivia questions, and giving away great prizes. Head on over to http://www.tristipinkston.blogspot.com to enter and to have a great time!
- March 24, 2012 No comments:

CALLER ID is available on Amazon.com for an incredible price!
I have a special offer for you—it’s only good for today—Thursday, March 22, 2012. Purchase CALLER ID from Amazon.com using this link. Then email RachelletheWriter@gmail.com with your order confirmation/receipt. Once Rachelle receives your order details, she will email you an amazing selection of over 20 free gifts.
Here’s what’s in store when you purchase CALLER ID today:
(All items will be emailed to you from Rachelle after she receives your order confirmation.)
The Armor of Light (Book 2 of the Wolfchild Saga), TheMisadventures of a Teenage Wizard, Book 1: Two Souls are Better Than One
Chased by dragons. Saved by a Pegasus. Sharing his mouth with a wizardly spirit.
Why a book bomb? A book bomb is when a large group of people order a certain book on a specific day on Amazon. This pushes the book's popularity up the Amazon ranks, which in turn gives the book more visibility to Amazon shoppers. That’s the goal today for CALLER ID!
- March 22, 2012 No comments:

Dog in a sweatshirt 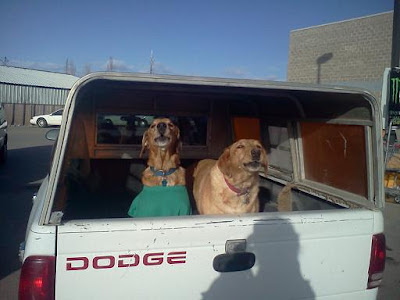 I've seen dogs wear clothes before, like little doggy capes with front leg holes that say, "What happens on the sidewalk stays on the sidewalk." But the clothes I've seen so far are doggy style. When I went to the grocery store the other day, I saw a dog with a people sweatshirt on.
Okay, so it's cold outside, I get that. They probably don't make "What happens on the sidewalk..." doggy coats in his size, either. I'm all for adaptability. The thing I didn't get is the OTHER dog with no sweatshirt. Why does one dog get a sweatshirt and another dog in the back of the very same truck doesn't?
Maybe it's some sort of canine security blanket, the sweatshirt the dog had since puppyhood. Perhaps the other dog is better adjusted, able to ride around with his head sticking out the window and no thought for security.
Some things just plain make us feel better.
What do you have for a security blanket, real or metaphorical?
- March 19, 2012 No comments: 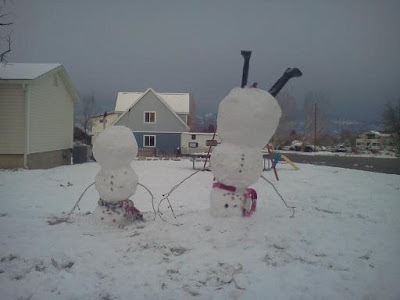 My son asked me the other day, "Do you like snow?"
Without even stopping to think, I heard myself say, "Yes." After I answered him, I thought about it. Then I agreed with my spontaneous answer. Snow is beautiful. Snow can be funny (check out these snowman pictures!) Snow gives us summer water. Snow makes my yard look great. It's fun to walk in falling snow. Snowstorms give me story ideas. Last week, I was able to WALK ON THE TOP CRUST OF SNOW, something I haven't been able to do since I was a kid! So snow can turn the clock back. 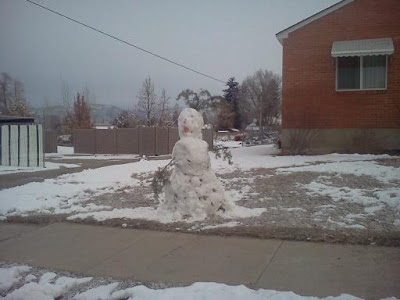 Some people complain about it. Does that make it go away?
No.
Enjoy what comes. Rain, sun, snow, cold, warm, hot, just take it in. Take in life. Find the joy.
What's your favorite weather like?
- March 12, 2012 2 comments: 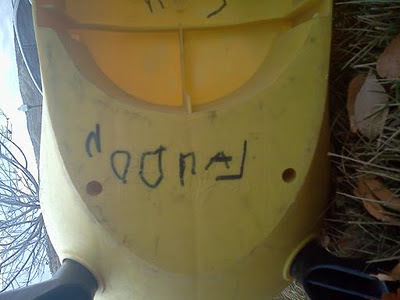 My kindergartener grandson has a little 3-year-old brother named Landon. One day, he decided to do a service for his brother and write his name on his wiggle car so no one would take it. But he didn't know how to spell Landon's name. So he sent Landon inside to look at the wooden letters of his name hanging on the bedroom wall. Landon told him the first letter, then ran in to check on the second letter. After reporting that one, he ran in to see what the third one was. After enough cooperation, Landon's name was spelled out in bold black marker.
It was a laborious process for two little boys, but neither one gave up until their goal was accomplished. Could it have been done better? Not at their age.
What is it that you want to do that seems too hard, or that you don't believe you can do well enough? How about doing it just as well as you can right now? What's stopping you?
*
(Check out the Chicken Story at Skylee Fair by clicking here! It's a fast read, and you won't believe the picture I found!)
- March 05, 2012 No comments: