Marcia Ward tagged me for the "7 Things About Me" meme.

Rules of the 7 things Meme:
1) Link to the person who tagged you and post the rules on your blog.
2) Share 7 facts about yourself.
3) Tag 7 random people at the end of your post, and include links to their blogs.
4) Let each person know that they have been tagged by leaving a comment on their blog.

Okay, here go the 7 Things About Me, Like them or not:
1. Commercials can make me cry.
2. I was 30 years old before I got used to my height.
3. I'm surrounded by men. My husband and I have six sons. (No daughters.)
4. I really want a passport for my birthday. (Even though I don't have immediate plans to go anywhere, I still want one... just in case.)
5. The ickiest job I ever had was cutting hearts and livers out of turkeys.
6. I really like sparklies, I mean anything that sparkles makes me say, "ahhh!"
7. I can say the ABC's backwards.

I TAG:
We're Starting from Scratch
Wanderer in a Strange Land
VioletLady at Home
Under Construction
TigerSue's Jungle
Traci Abramson
The Bennett Family

Email ThisBlogThis!Share to TwitterShare to FacebookShare to Pinterest
Labels: 7 things about me, biography, trivia

Sing It With Gusto 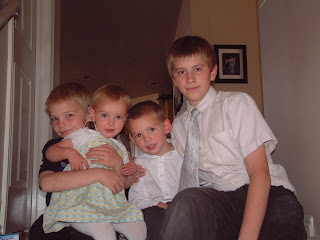 Bob and I just got back from the obligatory elementary school Christmas program. There's nothing wrong with music, but it's easier to take while I'm working on something else. Life seems to be all about multi-tasking these days, more's the pity. But we were being good parents, going out in the cold, dark night to see our son sing a Christmas song.
While waiting for the 3rd grade's turn, we were delighted to hear "Blue Christmas" belted out by a bunch of preschoolers that couldn't have been more than knee-high, clutching paper guitars and swaying in their neon plastic sunglasses. Their voices filled the college gymnasium with energy, happiness, and enthusiasm. Bob even put his book down to watch and listen. Several chuckles from the audience punctuated the lively performance.
I had expected to merely endure the program with good grace, but with a beginning like that, I couldn't help but smile through the whole thing. Thanks to a bunch of elves in disguise, my Christmas season was better than before I braved the dark and cold.
So even if you don't have little ones in it, go see an elementary school Christmas program. It will be worth it.
- December 17, 2007 1 comment:

It looked heavenly, a soft yellow lemon filling crowned by a thick cloud of meringue. It wasn't hard to choose that slice of pie out of the apple, pumpkin, and chocolate cream sitting on the buffet table. I reverently lifted the slice in my hands, holding tight to the plate to keep the confection from floating away. Oh, yeah, this one was worth the calories.

I carried the slice back to my place at the dining table. I set it down at an angle worthy of a Southern Living magazine front cover. Then I settled myself in my chair and picked up my fork. I watched the tines descend to the point of the pie, the perfect place to start eating. The crust broke easily, promising a tender offering of pastry. I lifted the bite up from the plate, my tongue tingling in anticipation, my mouth opening just enough to let the pie slide inside. I closed my mouth around the tines of the fork and pulled the utensil free. Then I began to chew.

Instead of closing in bliss, my eyes nearly popped out of my head. The soft pie in my mouth sent out waves of flavor so metallic, my tongue cringed. If there was a garbage can by my side, I would have made a donation. Although the texture was all wrong, mouthing that pie was like chewing on a tin can. Augh!

Only because of 49 years practice, my ingrained table manners forced me to swallow that first bite of pie. It remained an orphan in my stomach, destined to digest alone.

What had possibly gone wrong with that beautiful piece of pie? I can't imagine. The mystery will go with me to my grave. One un-mysterious thing is the lesson of that strange Tin Can Pie. You can't know what something (or someone) is really like inside just by looking at them. You don't need to take a bite out of them, but you can carry them around a bit and probe them with words instead of a fork. Someone who may look like a mud pie dropped in the gravel and scooped back onto the plate may prove to be the sweetest friend you've ever had.

My son, Brian, got himself a couple of cute little pacu fish, no bigger than a dime. I bought Brian a fourteen gallon aquarium to go with them. You could hardly see the little guys in all that water.
But then something happened... Brian fed his pacu pair. And they grew. A lot. Those darling little punctuation marks turned into candidates for deep sea fishing. They probably measured about a foot long each, but they wouldn't hold still long enough for us to make sure. One thing we were sure of was that their tank was too small. They'd flick their tails and bump their noses on the glass, then execute a tight about-face and flick their tails once to find themselves bumping noses on the opposite pane of glass.
So we got them a bigger tank. But now the question arose, how are we going to move them? They wouldn't fit in any net that our pet store had, and Brian nixed the idea of a fishing pole and bait. What to do?
Big brother Zackary came up with the solution to scoop the fish out with a plastic gallon jug. It seemed the perfect solution for everyone but the pacu's. Once Zack cornered one and scooped it into the pitcher, it thrashed and fought like a maniac. After a startled pause, Zack finally poured the fish into the larger tank, where it promptly lay on its side and flipped its tail, swimming crookedly across its new expansive home.
The fellow's friend got the same treatment and acted the same way, we don't know if it was peer pressure or what. They both swam sideways, back and forth, back and forth, for several minutes. Bored of waiting, and without any signs of synchronized swimming moves, I left the room. The next time I checked on them, the fish went spastic, swimming like the water was on fire. (Well, you know what I mean.) So I turned off the aquarium light and left them alone for awhile.
Now the two are in fish tank heaven. (No, they didn't die.) They can flip their tails at least four times before bumping into the glass wall. They're swimming straight, and they can even go up and down if they feel like playing submarine.
I think that a lot of us swim sideways when we're thrown into a new situation, even if it's for our ultimate good. It feels like we're in someplace too big, too different, too scary. But soon enough we'll gain a clearer perspective of where we really are, and realize that we can go faster and further than we ever have before.
I say, bring on the big fish!
- December 09, 2007 No comments:

(This isn't mine, I could only find the name "Anonymous" on it, wow! that "Anonymous" is some writer! I think this really puts priorities in perspective, so I'm sharing!)

A woman, renewing her driver's license at the County Clerk 's office was asked by the woman recorder to state her occupation.
She hesitated, uncertain how to classify herself.
"What I mean is," explained the recorder, "do you have a job or are you just a......?"
"Of course I have a job," snapped the woman. "I'm a Mom."
"We don't list 'Mom' as an occupation, 'housewife' covers it," said the recorder emphatically.
I forgot all about her story until one day I found myself in the same situation, this time at our own Town Hall.
The Clerk was obviously a career woman, poised, efficient and possessed of a high sounding title like, "Official Interrogator" or "Town Registrar."
"What is your occupation?" she probed.
What made me say it? I do not know. The words simply popped out. "I'm a Research Associate in the field of Child Development and Human Relations."
The clerk paused, ball-point pen frozen in midair and looked up as though she had not heard right.
I repeated the title slowly emphasizing the most significant words. Then I stared with wonder as my pronouncement was written, in bold, black ink on the official questionnaire.
"Might I ask," said the clerk with new interest, "just what you do in your field?"
Coolly, without any trace of fluster in my voice, I heard myself reply, "I have a continuing program of research, [what mother doesn't) in the laboratory and in the field, (normally I would have said indoors and
out). I'm working for my Masters, (first the Lord and then the whole family) and already have four credits (all daughters).
Of course, the job is one of the most demanding in the humanities, (any mother care to disagree) and I often work 14 hours a day, (24 is more like it). But the job is more challenging than most run-of-the-mill careers and the rewards are more of a satisfaction rather than just money."
There was an increasing note of respect in the clerk's voice as she completed the form, stood up and personally ushered me to the door.
As I drove into our driveway, buoyed up by my glamorous new career, I was greeted by my lab assistants -- ages 13, 7, and 3. Upstairs I could hear our new experimental model, (a 6 month old baby) in the child development program, testing out a new vocal pattern. I felt I had scored a beat on
bureaucracy!
And I had gone on the official records as someone more distinguished and indispensable to mankind than "just another Mom."
Motherhood! What a glorious career! Especially when there's a title on the door.
Does this make grandmothers "Senior Research associates in the field of Child Development and Human Relations" and great grandmothers "Executive Senior Research Associates"? I think so!
I also think it makes Aunts "Associate Research Assistants."
May your troubles be less, your blessings be more and nothing but happiness come through your door