Hey! It's my birthday! So I got up, wore my sparkly shirt and curly hair and went to church. (Since it was Sunday, I left my customary "Happy Birthday to Me" badge at home.) But, lo and behold, when I walked into the cultural hall, there sat a black "HAPPY BIRTHDAY" balloon just waiting for me! Well, it did have the wrong year, which is what my oldest son turned a couple of weeks ago, but the sentiment was there, and I still have a 30-year-old inside me somewhere! So I picked it up and carried it with me through the rest of church. Yeah, I did!
I mean, how can it be anything but a good day when it starts with a happy birthday balloon from heaven?
- May 31, 2009 13 comments:

The alternative high school where I've worked the past four years has finally closed its doors with a bizarre end-of-school cookout. Not that the cookout was bizarre (except there wasn't enough watermelon). Our principal actually owns a catering service called "Ragin' Cajun" so he barbecues quite well and we eat heartily. No, the strangeness at this event was the main course, whose name happened to be "Stumpy."
We had a new teacher this year, and she's from a rodeo family, so they have lots of livestock. It's turns out that she was the provider of the ribs and steaks from her pet steer, named because the fluffy end of his tail was missing when he was born. "It was so funny to see him swish flies," she said, her eyes big and wet with remembering. "His tail would wag back and forth over his rump like a dog's." She blinked. "I miss Stumpy."
Well, my appetite was ruined. I mean, when you see cuts of meat on a plate, you don't necessarily see the animal they used to be, especially not a pet steer who wagged its tail like a dog!
"How can you talk about him like that?" I asked, my stomach rumbling.
"Oh," she said, wiping her eyes and looking up at me, because I'm nearly a foot taller than her. "It's all part of the circle of life. And when I die, ALL my animals are going to be there to meet me. Even Stumpy."
Well, if Stumpy wasn't going to hold a grudge, who am I to judge?
- May 23, 2009 3 comments: 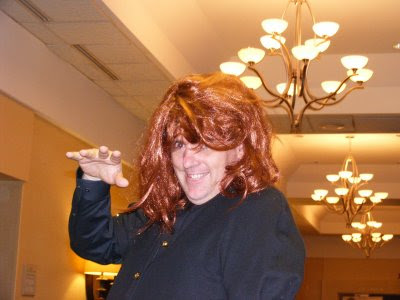 by Shirley Bahlmann
My son, Bron, and I went to Santaquin to watch a master in action... J. Scott Savage regaled the children of C.S. Lewis Academy with his own storytelling exploits at age 11, as well as giving them a glimpse into his fabulous "Farworld" book, all after doing a really cool magic trick, of course. He was cool enough to introduce Bron as a fellow author. We really enjoyed our time with the man of energy and his lovely, talented, intelligent wife, Jennifer. It was time well spent! 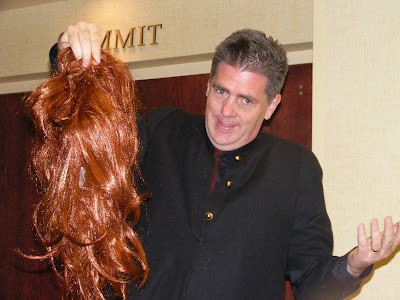 I really need to get back to writing. My fingers ache from lack of typing stories. I've been reading a lot, and putting together book launch signings throughout the county for my son's new book, "Bone Warriors." Golly, publicity takes a lot of time! But it's all worth it in the end, right? Right? RIGHT?
- May 14, 2009 4 comments:

Email ThisBlogThis!Share to TwitterShare to FacebookShare to Pinterest
Labels: publicity

I just love this photo! 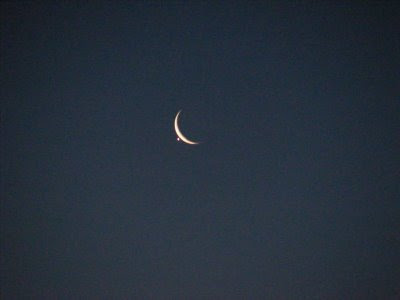 by Shirley Bahlmann
Not only is my early morning walk doing good things for me physically, it also gives me an emotional smooth-over to transition from sound asleep to the many voices of a family. A few days ago, I had an even better surprise when I found the moon and a planet so close together that it kicked my imagination in the behind and sent me home to get my camera!
I don't care if you like it or not, because I do, and it's my blog.
- May 07, 2009 1 comment:

Hey! Have you had a great mystery lately? Tristi Pinkston is serving one up right this very minute with a contest like I've never seen before! So get out your deer stalker cap and check it out by clicking here:
TRISTI'S MYSTERY CONTEST WITH COOL PRIZES!
- May 06, 2009 No comments:

by Shirley Bahlmann
One thing mentioned at the Storymaker's Conference last weekend was the need for chapter books. So I went to the local library to do some research. I was amazed at the scope of books that were listed under chapter books. Some of them were over 200 pages long! Yes, they had chapters, but, no, I don't think they were what the speakers meant when they said "chapter books." It's the transitional kind they were talking about, the ones that take readers from picture books to YA novels. I got some of those, too, and read 8 books last night. I just curled up in bed with a handful of chocolate cherries and a jug of grape juice and read and read until my 18-year-old asked me to go to WalMart with him to look at car stereos.
Now, I ask you, what do I know about car stereos? But he agreed I could come in my pink teddy bear-print pajama bottoms, so I shuffled along behind him in the store, reading as I went. I did prove useful, though. I fetched store personnel twice to answer my son's questions. I suppose that's because it's too embarrassing for a suave 18-year-old to ask for help. Better to send your mother in pink pajamas.
- May 01, 2009 4 comments: