It was my daughter-in-law’s birthday. Now, while homemade creations such as Dr. Seuss cakes, (unintentional, mind you) with frosting bulging out the seams and a silhouette that rivals the Leaning Tower of Pisa is fine for boys, it’s not for a girl. Sometimes my boys made their own cake mess out of mud brown frosting, dented by the plastic feet of cowboys and Indians hastily washed with a dollop of dish soap in a rushing stream of tap water. Once the eager fingers poked partially melted cowboys who sat too close to the campfire and three-legged horses into the frosting, the creation was celebrated by a lusty birthday song.
No, for Jamie, it had to be something nicer, something not made by me or my sons.
So we went to the bakery. As soon as my 12-year-old, Brian, saw it, he knew the cake was Jamie’s. Frosted in royal purple icing, with piping of white and pink around the edge, it was decorated with plastic figures of purses, high heels, and hats. Spread across the expanse of purple were the words, “Born to Shop.”
Yes, it was a cake worthy of my daughter-in-law.
We bought it and carried it home on Brian’s lap. It was either that, or risk having it slide around in the back. I figured if Brian made a move to take off the plastic cover, I was close enough to put a stop to it before he could do more than inhale the sugar and shortening aroma. When we got home, the cake was still intact. When the magic moment arrived, Jamie “oohed” and “aahed,” and laughed in delight at the clever confection.
Seven-year-old Michael sat by Jamie and I set the cake on his lap, making sure his hands were secure on the base before I let go. I snapped three pictures.
Then Michael stood up and started toward the kitchen with the cake. That was when the cake decided to make a run for it. But without any legs, how far could it get?
It was a subtle move at first, the cake making miniscule progress toward the side of its plastic platter. But as it gained momentum, it moved faster, shifting weight pulling the plate sideways in Michael’s hands.
At the final moment, the cake did a swan dive and landed upside down on the carpet. Rather dead than fed.
After a second of stunned silence, I burst out laughing. So did everyone else. Except fifteen-year-old Zack. He gave a sick little smile. He’d wanted some of that road-kill cake.
When I could speak, I said, “Well, Jamie, it looks like we saved ourselves a few calories. But there’s still plenty of ice cream.”
When we scraped the cake off the floor, the only thing left behind was Jamie’s name, written backward on the carpet.
We’ll never forget her birthday, no, we never will.
- June 15, 2009

I found this shirt in a thrift store. I liked all the colors. I liked the puzzle pieces. and I liked the words, except that I don't kno... 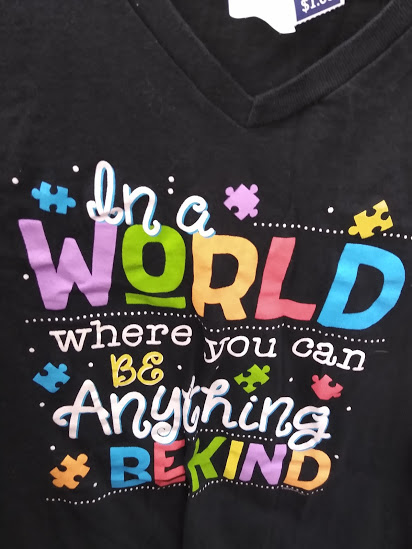