by Shirley Bahlmann
I got to go to the LTUE writing conference at BYU last weekend! WooHoo! "Life the Universe and Everything" was smart enough to invite my oldest son, Andy, (Andrew on the program) as a presenter on Tolkein and the Wanderer. I dropped off three of my other sons to listen to their brother, but then I couldn't find a parking space to save my life! (They REALLY should have a "mother of presenters" private lot.) Finally I had to park off campus and run like a maniac to get there 10 minutes late. Andy was so professorial that he even read some Old English. The audience seemed to understand his lecture, even though most of it went over my head until the question and answer section. Then it got fun and laughing, so I could follow that! Take my word for it, he did a GREAT job!
To my chagrin, I'd only packed one pair of pink fuzzy socks for the 3-day trip. Well, I didn't pack them, they were on my feet. No worries! I washed them at night and hung them up to dry. But by morning, they were still damp. I could fix that. I stuck a hair dryer in the sock opening and turned it on. First steam came out, then a stinky smell. "Hey, what's up?" I thought. "Didn't I use enough soap?" I left the dryer drying and went to get my perfume to spray on my socks. By then it seemed the sock was dry enough, so I pulled it off the dryer nozzle and put the other sock on. Then I noticed crusty patches inside the dry sock. What the HEY? I turned the sock inside out and saw that the furries on my sock had melted together in patches! Ahhh! The stinky smell wasn't dirty sock, it was melting sock!
I pulled the socks on anyway, but the melted parts scratched my skin. I thought for sure that my favorite socks were ruined. But wait... no! They weren't, not when I turned them inside out! My feet were happy, I was happy, and I hope you're happy to know that you should never give up. Take courage! There's always a way to get past the trials of melted socks in your life.
- February 25, 2009 2 comments: Links to this post

Sherlock, move over for LEMON TART!

Oo, oo, Josi Kilpack's new mystery, LEMON TART, is out! I love mysteries, Sherlock Holmes being my first love, but you've got to go read about this and see Josi's pretty face and the bright, springtime cover on her new book! Click HERE: Amazing Anne Bradshaw free book offer!
(You'll be glad you did!)
- February 22, 2009 No comments: Links to this post 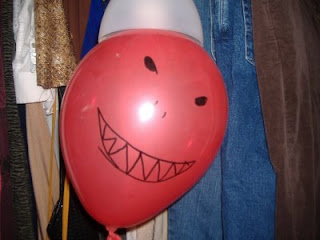 by Shirley Bahlmann
How would you like to be reading your scriptures in the quiet of early morning when you gradually become aware of a red face moving into your peripheral vision? You turn your eyes to the side in frank disbelief and end up nose to nose with a shiny, leering, toothy face drifting around your head, as though sizing you up to see how good you might taste.
Thanks to my artistic sons, I had that enviable experience. A partially deflated helium balloon that one of my boys so artfully decorated floated into my room after Bob left for work. Then it peeked over my shoulder like the devil looking for an opening. SHIVER ME TIMBERS!
Last weekend, another odd coincidence happened, although not so frightening. Michael had a basketball game in Manti, and afterward I started driving up to my mother's house to say "Hi." Before I'd gone half a block, my sister Loraine called and asked if I would ride with my mother to Highland where Loraine had arranged for her to try a new massage technique. Only 15 minutes earlier, I'd declined to go with Bob to a Richfield wrestling match, even though the lure of a Chinese food lunch was in the air. I was as free as a butterfly in a birdless world.
I left Michael with his McGarry cousins, much to his delight, then Mom and I got to meet with Loraine and have lunch, that is, after we made an emergency exit to feed Mom's hungry van two quarts of oil and a bottle of water. After lunch, I sat with my feet up on a cushioned chair and worked on a book on my laptop while Mom and Loraine listened to the massage-y lecture and demonstration. It was an unexpected adventure that all came together, and I'm glad it happened.
Today, I heard a story about a man who was losing his shale company. He chose to pay his tithing instead of making another loan payment, then went out for one last look at his place. Strangely enough, he noticed a shiny rock partially buried in the ground near his feet. When he dug it up out of idle curiosity, he found himself holding one of the largest gold nuggets in the world. It completely paid off his business loans, and he ran his shale company happily ever after.
Hey, I'd take a gold nugget over a red-faced balloon that still gives my heart the jimmy-jumps when I think about it. Wouldn't you?
- February 15, 2009 1 comment: Links to this post

Out from behind bars

by Shirley Bahlmann
Yikes - My son, Andy, reminded me that I haven't said if I'm out of jail yet. YES!
I thought I would be behind bars, but I was behind a door with a narrow window in it. If the door was pulled shut, it would lock automatically. This was not my favorite thing, but my cell mate, Michael, liked to lock the door, then call on the intercom for the guards to open it. Mega-muscle kid Michael also pulled one of the screws out of the metal flap that lets food pass through with his bare hands. He reported the loose screw to the authorities, but the next morning after he called on the intercom for us to be let out of the room (while I was doing deep breathing, telling myself that, yes, there was air) he pushed the door open and the trap door slapped down with a bang!
The room was only about 8' by 6'. The toilet was solid metal and was facing away from the door, but if someone put their face right up to the narrow window, they would be able to see a rather full moon. So I was glad to have my folding accordion cardboard fabric board to use as a screen. It was easier to access the cell potty than to run out and down the cement stairs and along the loooong hall to the public restroom.
Brian ended up coming only for the evening, enjoying the meal of tube steaks (hot dogs) and entrees (various bags of chips). He took one look at the barely 24" wide, 2" thick plastic covered foam mattresses and decided to go to the high school dance instead. But he did get his mug shot and a cool T-Shirt that reads, "I spent a night in the Sanpete County jail."
Brian missed the flashlight checks all night long. He missed the breakfast of pancakes and rubber eggs.
At one point, Michael patted the cell wall and said, "I like it here, Mom." So we had a discussion about how it could be fun if you knew you could leave. Otherwise, you wouldn't be able to go to the store or the park or the swimming pool or play with his friends, and it would get tiresome very fast.
I told Michael that's the only night I want him to spend in jail. And that goes for me, too!
- February 09, 2009 2 comments: Links to this post 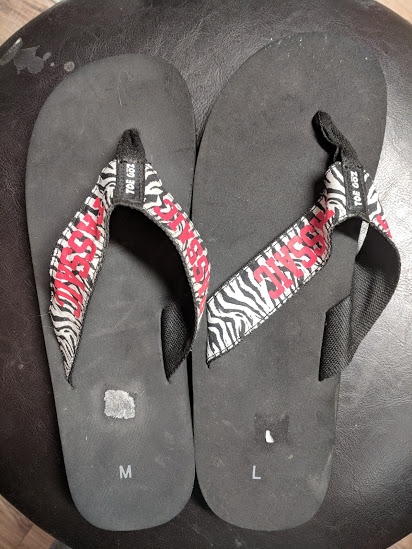