I was at the library minding my own business with my attention tuned to my laptop when I heard a tapping noise. I turned my head to see a feathery attacker just outside the window! 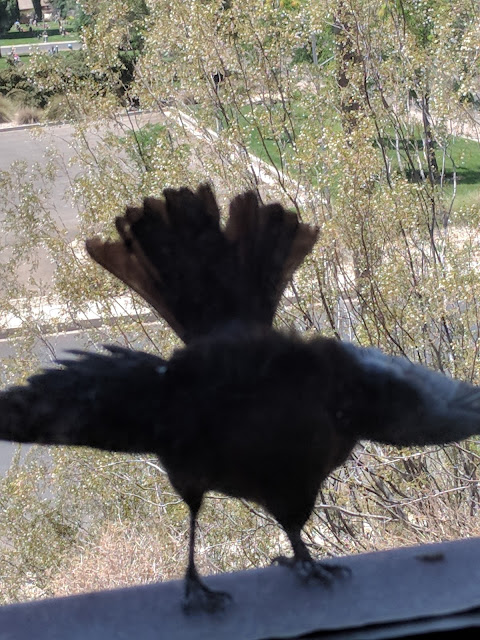 I don't know what this bird's issue was, but when it saw me staring at it, it glared back fearlessly. 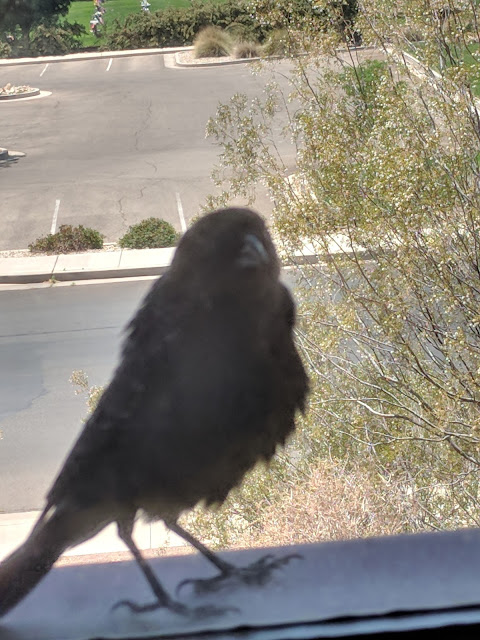 When it turned its beak skyward, I wondered if it was summoning reinforcements. (How many birds would it take to break a window? I know it's possible, with their sharp beaks and pointy toenails. Put enough of those together with a flying leap behind them, and put up your laptop to deflect shattering glass!) 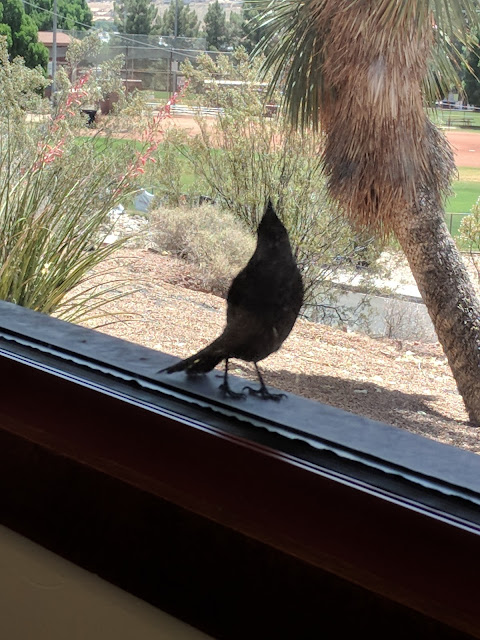 It was all a ruse. This feathered creature was such a force unto itself that I actually feared to step outside alone. 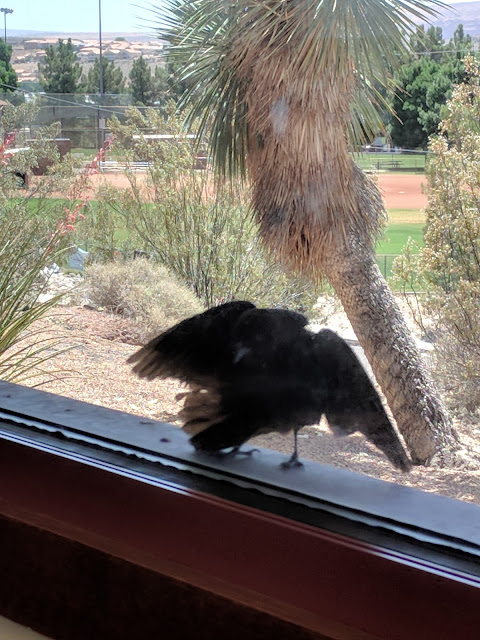 My fear may have stemmed from my older babysitting sister offering to let me, at 10 years old, to stay up late and watch a movie with her on television while the other children slept. (Or, as it turned out later for my two brothers, hide behind the couch to watch anyway.) The title of the movie?
The Birds!
Did you ever watch Alfred Hitchcock's "The Birds?"
(If not, you can click the title and watch it online... if you dare! I kept covering my eyes with a blanket, so maybe I should give it a grown-up try.)
- August 27, 2018 No comments:

This Car Belongs on Penny Lane!

When I was little, I actually thought an object's value was determined by placing money on it. When it was covered over with coins and/or bills (determined by the seller to be pennies or $100.00 bills or anything in between) that was the price one paid for it. 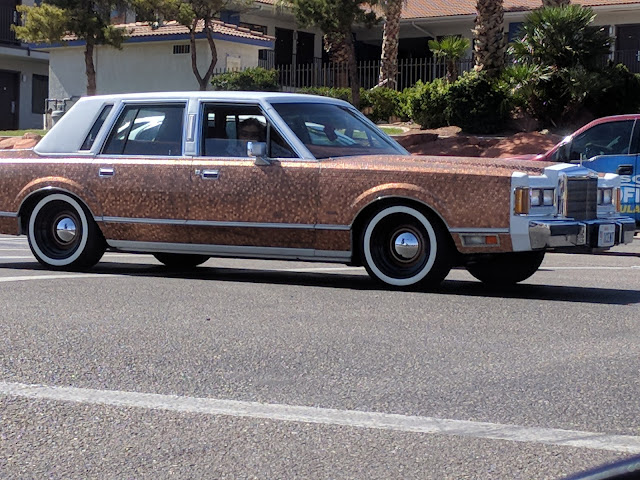 So this car, covered in pennies, makes perfect sense to me. (I would have gotten a closer shot for you if we'd been in a parking lot instead of an intersection!) 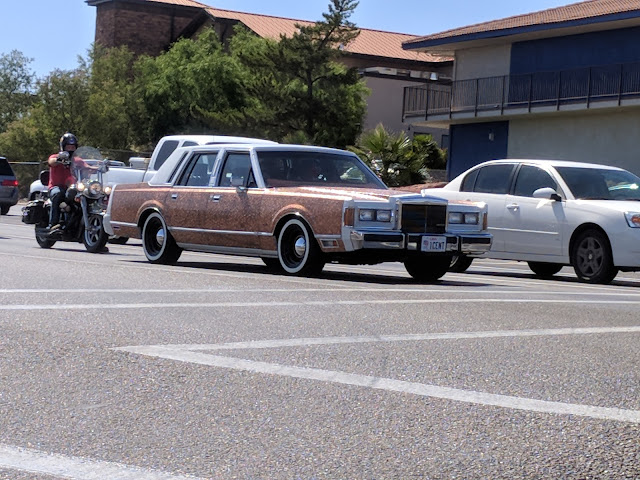 I wouldn't mind paying the price for a car by adding up the pennies covering its surface! I have to wonder, though, do kids try to pry the pennies off?
I once found four pennies on the sidewalk in front of our house, but couldn't pry them up. When I mentioned it to my family, one of my sons confessed that he had super glued them to the sidewalk because he thought it was funny to see little kids struggling to pick them up.
Are you familiar with the rhyme, "See a penny, pick it up, all the day you'll have good luck?" Do you believe it?
I was with someone a couple of months ago when we both saw a penny on the ground. When I asked if she wanted it, she said it was tails up, which meant bad luck. If it was heads up, it would have been good luck.
Since I'd never heard that reasoning before, I picked it up and instantly became one cent richer than she.
If you see a penny, do you pick it up?
- August 20, 2018 No comments:

Horse on the Hood

Ever since I was old enough to listen, I've heard of cars having "horse power." According to Google:
The term was adopted in the late 18th century by Scottish engineer James Watt to compare the output of steam engines with the power of draft horses.
(Click the quote above for its origin.) 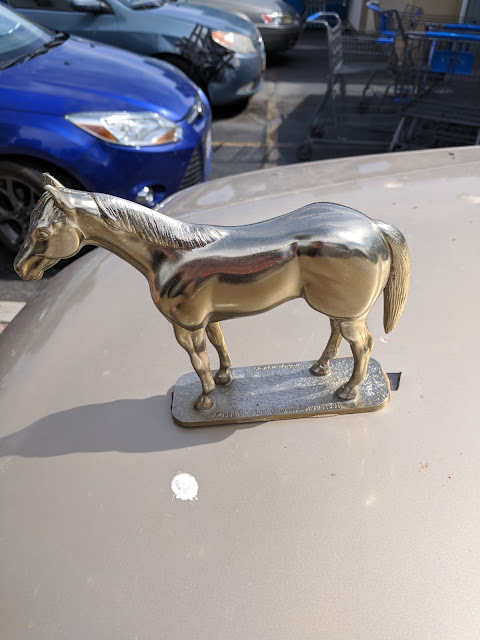 When I came across this car in a parking lot, I was stopped by the unique hood ornament. I'd never seen one like it before. 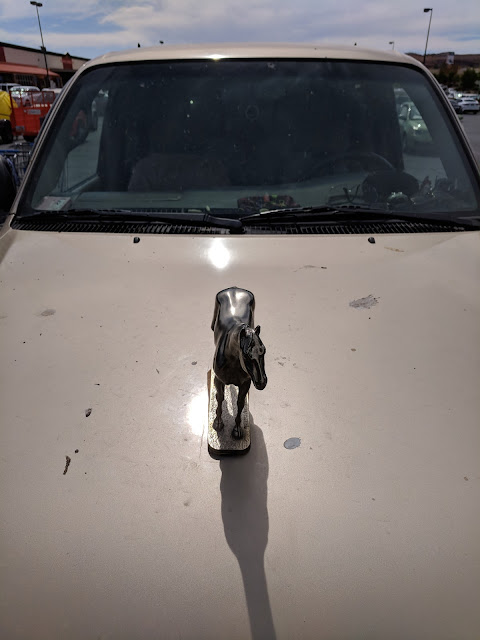 It didn't look to be the kind of vehicle that could transport a horse. 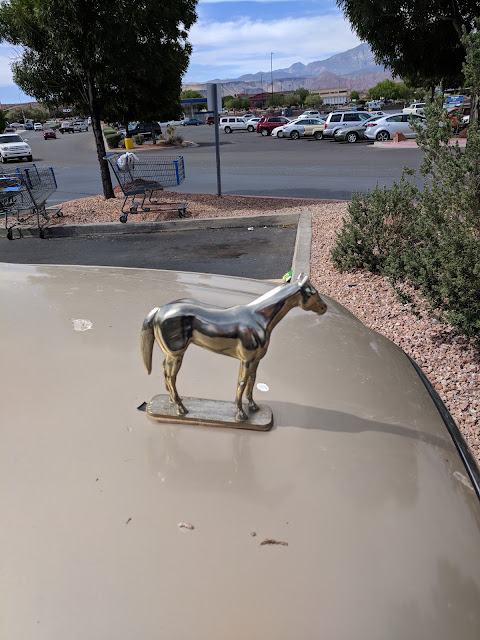 Not unless it had a lot of HORSEPOWER under the horse statue!
Speaking of horses, I would rather try to maneuver a horse into the gap between these pillars at a local theater than the car that is somehow magically stuck in there. 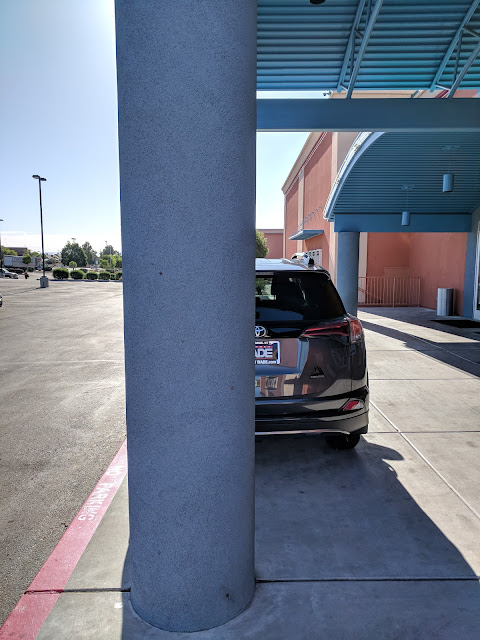 (I dunno, do those wheels actually turn sideways?) 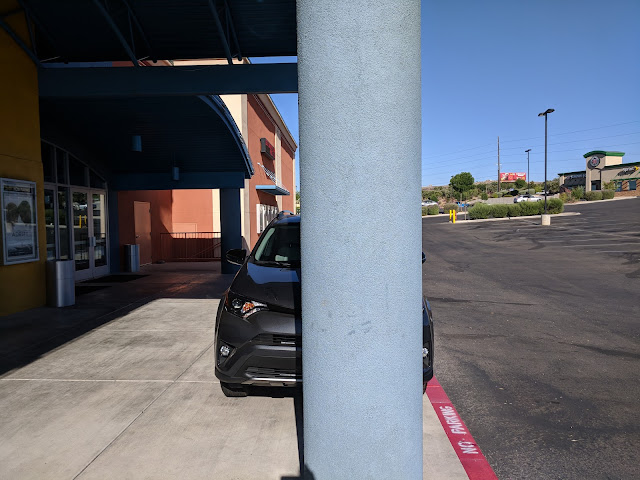 That is some fancy maneuvering. 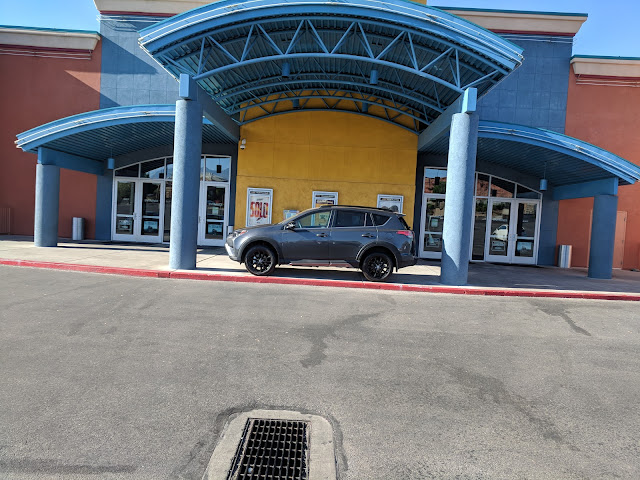 If I tried to drive it in there, you could expect the car to be covered in bumper bandaids, like this one I idled behind at a stop sign. (Looks like I need to clean my windshield.) 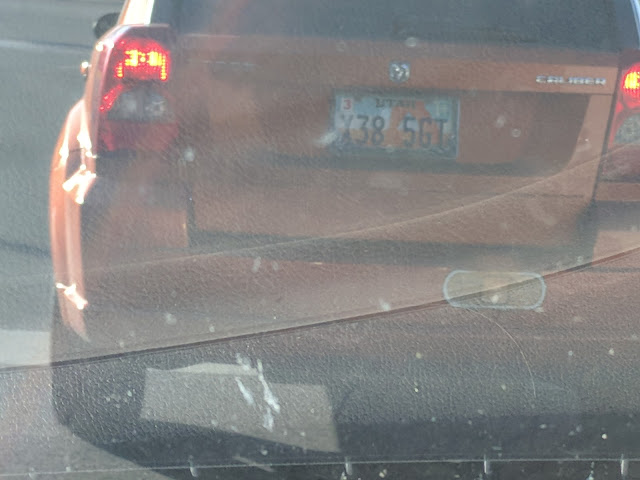 Do you like detail-oriented things, like horse hood ornaments or maneuvering cars into small spaces?
- August 06, 2018 No comments: 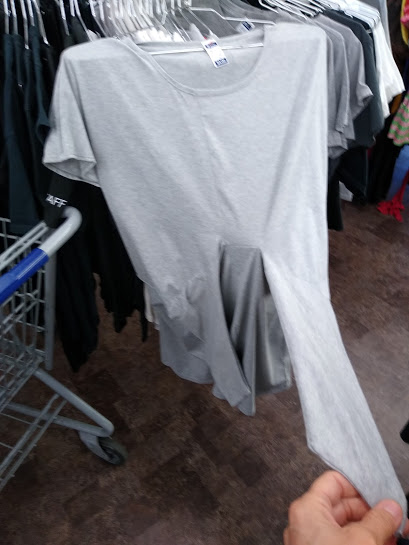